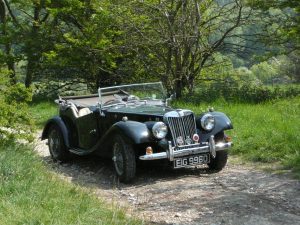 In 1971 Roger Blockley was working on the Spitfire production line at the Standard Triumph factory in Coventry. In his garage at home he was building what was to become the first ‘Gentry.’ He used a Triumph Vitesse chassis, 1600 engine and a pair of original MG TF wings. It took him over 20 months and was completed in 1973. The car was admired by many and he was encouraged to build another for his father. Having completed this second car he then started to produce them commercially early in 1974.

The first premises were in a run-down mushroom growing shed on a small holding at Barwell, Leicestershire. This was to become RMB Motors’ first factory. The Gentry was sold as a fully assembled body shell needing only 12 bolts to secure it to a Herald or Vitesse chassis.

In 1989 Roger sold the business to 2 Gentry owners, Mick Sinclair and Terry Phillips who traded as SP Motors. In May 1990 a new custom chassis was introduced to take the running gear and engines from the Ford Escort and Cortina models.

During April 1997, Mick left the company and Terry continued production on his own, trading as TP Motors. He made another change to the build in that it was adapted to take Ford Sierra mechanics. He continued production until June 2001 when the factory unit was sold. The Gentry production rights were then sold in December 2002 to the Vintage Motor Car Company in Doncaster, thus moving the car away from its Midlands roots.

After an unsuccessful time with the Vintage Motor Car Company, the business was bought by Midlands Register members, Geoff & Ellen Beston who returned the production back to the midlands being based in Nuneaton.

At the National Kit Car show at Stoneleigh in May 2008 the car returned to production and is now once again available from the Gentry Motor Car Company as a self build car.

Our Gentry website is a good starting place to find out about the Gentry Register and what we do. Many of us are quite active on Facebook, whilst others prefer to keep in touch via our Forum. So if you want to know more, or have questions about the Gentry, why not join in, we would love to hear from you!

Forum
We also have a forum where we have a monthly “get-together” as well as the usual day by day exchanges.

Email
If you have a specific question about membership, you can send us an email.